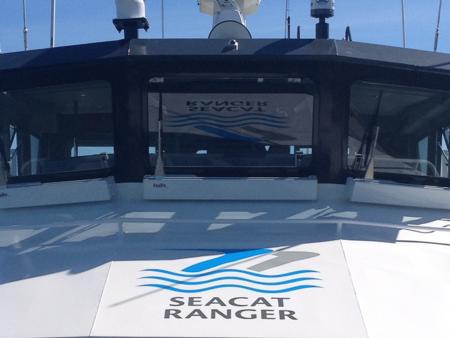 Following completion of inaugural sea trials in May, Seacat Ranger will embark on a string of European offshore wind farm charter contracts that will keep her under continuous, active charter until May 2015.

Following an official naming ceremony, scheduled to take place on Wednesday 11th June 2014 at Seawork 2014 (www.seawork.com), Seacat Ranger will head directly to The Westermost Rough Offshore Wind Farm. Located on the east coast of the UK, the project is being developed by DONG Energy, where the installation of the offshore electricity substation has recently been completed.

In European waters, demand for highly capable, class certified offshore energy support vessels is reaching unprecedented levels, as a growing number of offshore wind projects reach a critical construction phase. As the largest offshore wind projects begin to take shape far from the shore, the demands of the developers are escalating, in order to keep apace with the speed of new construction and growth.

Directly following the completion of this short-term charter, Seacat Ranger will join another 24-metre Seacat Services vessel in order to fulfill a longer commitment for a major European manufacturer.

Meanwhile, with a number of established client relationships already in place, the remaining five operational Seacat Services workboats will remain on continuous charter throughout the winter, working across a range of European projects in repeat contracts.

“Nobody doubts the significant pace of industry innovation and growth that has taken place within the offshore energy vessel support market over the past 24 to 36 months,” said Ian Baylis, Managing Director, Seacat Services.

“While reliable crew transfer support is clearly critical to project delivery and current demand for vessels is unprecedented, as developers become better acquainted with the service provided by vessel operators, the market has become increasingly competitive and the larger, more robust vessels are starting to win the lion’s share of challenging project work.”

In addition to the currently operational fleet, Seacat’s first 26-metre catamaran, Seacat Intrepid, is currently in build at South Boats Isle of Wight. The vessel, designed with the future requirements of the market in mind, is set to undergo sea trials in September, ahead of full deployment in October 2014.

“The development and design of Seacat Intrepid, driven by the demand we’re currently experiencing from within the market, has been assisted by operational feedback from both clients and crew,” added Baylis. “As our first 26-metre vessel, she’s a real game-changer and will be an invaluable tool for developers operating in testing environments such as the deep waters of the German Bight.”

Seacat Ranger, an aluminum-hulled catamaran, accommodating 12 wind farm technicians and 3 crew will be at berth V27 throughout the Seawork exhibition, taking place from 10th-12th June in Southampton.

She will be officially named by Mike Unsworth, Project Development Director, Navitus Bay, at 14:00 hours, on Wednesday 11th June 2014.